The Illawarra Under 10’s started the 2014 Country Championships with some confidence due to some good form at Coasties Cup.  Game 1 saw us take on Central Coast with the bare minimum 9 players due to school commitments of three of our younger players.  All 9 players batted extremely well with 6 hitting 1.000 and only four outs (all catches) being recorded against us. Some excellent fielding including an unassisted double play by Cal D at 1st base saw us end up with a 30-18 win.

In Game 2 we were up against 2014 Coasties Cup Champions – Newcastle.  As we didn’t play them last month we had nothing to gauge our chances by. This proved to be a tougher challenge which saw our batters tested.  We did not bat through the line up with the ease of Game 1 but did manage to finish 13-12 victors, thanks mainly to strong defence.  Cal D ended Day 1 batting 1.000 with 11 from 11 and 18 total bases.  Special thanks to Patrick for making an appearance in this game – it proved to be his only game due to illness.

Day 2 saw us play the same 2 teams but in reverse.  It also saw a reversal of our form.  An 18-11 loss to Newcastle and a 26-24 loss to Central Coast really tightened the competition up.  Some excellent outfield catching and infield defence kept both games reasonably close. Emrys finished his first day of the competition batting 1.000 with 9 from 9.

The pointy end of the competition saw us play in a knock-out semi against Coasties.  We started slowly and were in danger of throwing away our good start to the competition.  We were kept in the game by some superb fielding including sliding and diving outfield catches and Max owning his position at short stop with a couple of catches and some put outs. Some much improved batting in the last few innings saw us snavel a 22 all result which moved us through to the final on for and against. Seth, Hunter and Matthew joined the 1.000 club for this game.

The final did not start well for us with 2 of our first 3 batters getting out, but this started a 2 out rally which culminated in an in the park home run by last batter Luis.  The lead ebbed and flowed with a couple of our innings being scoreless – great defence kept us in the game and some solid batting in the last few innings saw us claw the lead back.  We went into the bottom of the 7th needing to defend a 5 run lead.  Newcastle got 1 run back and started to fill the bases before we secured the 3rd out and took out the 2014 NSW Country Championships 20-16.  Matilda, Hayden and Luis batted perfectly in the final.

Cal D led the batting average at .897, with Emrys close behind at .895. Callum also led runs scored with 19, Eathan 17 & James with 15. RBI leader was Max with a massive 24, and Luis deserves special mention with his home run.

Thanks again to Murray and Brian for assisting with coaching, Jude for scoring and Josh for umpiring.  Congratulations to the kids for continuing the recent tradition of Illawarra success in the Under 10 division. 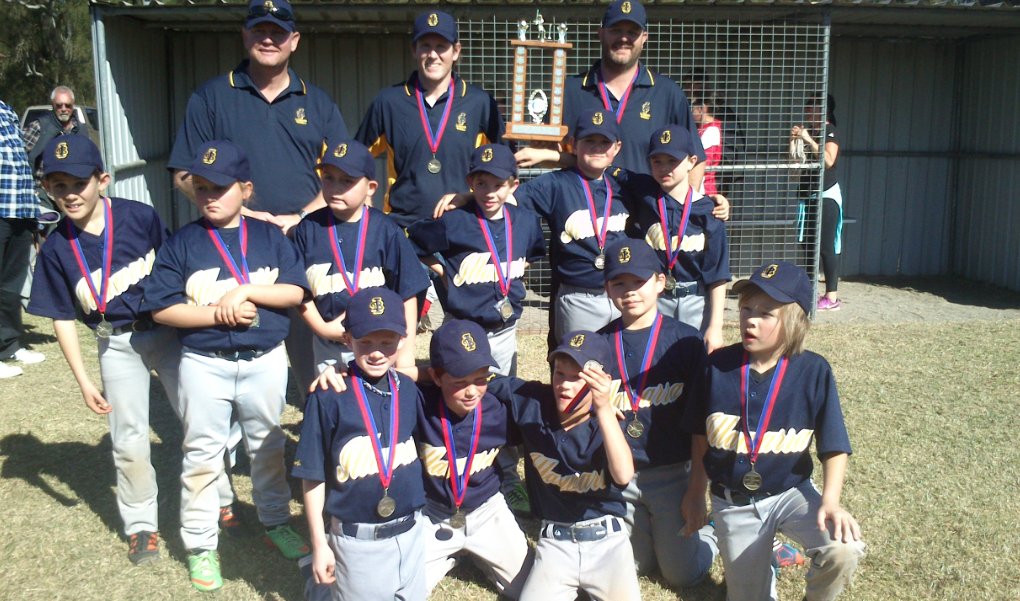