Over the first weekend of July an Illawarra under 10’s team attended Coasties Cup and played six games over the three days.  The team started well with a 23 all draw against Macarthur with our winning runner being tagged out sliding into home on the last play of the game.  As the score indicates there was plenty of hitting going on.

Our second game was against the hosts and whilst there were plenty of great individual performances we didn’t field as well as we could and went down 29-17. Day 2 saw us take on Greater Western Sydney and our bats came out singing with 32 runs scored in a seven innings game. Defensively we were strong allowing only 17 opposition runs.

Our next game against eventual winners Castle Hill was a strange one with our defence shutting them down the first 2 innings and only allowing a couple in their 3rd at bat allowing us to take a slight lead into the 4th inning.  Then the wheels fell off – we couldn’t score a run and besides some brilliant individual outs we couldn’t end their innings early. They put plenty on us and ran out 30-4 victors.  A night out at the club and some rumbling on the dance floor seemed to be the best preparation for day three of the tournament.

Solid victories over both St Marys and Quakers Hill and a massive effort in the field in the final game, where over the 7 innings we only allowed 9 runs, saw the kids leave the tournament in great shape to take on our country cousins early next month.  Statistically we had 2 batters that hit over .800, Eathan (.875) and Emrys (.826) with both leading the runs scored with 13.  Also of note was Cal D with a very impressive 16 RBI’s. Everyone contributed well with the bat and at some time defensively everyone could have made a play of the day sports reel.

Most importantly the kids got on well together and played the game in the right spirit. Many thanks to Jude for scoring, Murray and Brian for coaching, and not forgetting Josh for umpiring.

The weather Gods had finally descended on Gosford delivering superb weather for Coasties Cup with 3 days of sunshine. Although each day started chilly, it soon warmed up to a fun filled day of baseball. The Illawarra U12’s had a great time at Coasties Cup this year with several new players experiencing representative baseball and a tournament for the first time. Although we didn’t have a lot of time to prepare, the kids were keen and ready to play ball.

We were up against the hosts Coasties for game 1 who took us by surprise and thumped us on our opening game. We later learnt this loss wasn’t so bad considering Coasties were undefeated all tournament. After the wake up call, our kids started to gel and played some great baseball against Macarthur in our second game. Although they improved they still went down to the colts by a convincing margin.

After a night out to the movies with the team to cheer them up from Day 1 blues, the team came out firing on Day 2 against Greater Western. With some great hitting and base stealing, we finally got to taste victory with a 9-3 win. With smiles wider than their faces, the Illawarra U12’s were ready for their next game against Seadogs (Pirates). Having had a break and tummies full from lunch before the game, it seemed to have slowed us down going down to the Seadogs in game 4. They must have put something in those hotdogs as it wasn’t the same team I saw a few hours prior. Oh well, we ventured out that night for a team dinner and to reminisce the good old times when we had won a game.

By the final day of the competition, the team had finally found their placing and brought it together against Newcastle in a nail bitting finish. The last few innings was pure magic as the team had played some of their greatest baseball to date. They almost pulled off a triple play which is unheard of at this age. With all the brilliant plays made by the team, we fell just short in taking our second win. Despite going down to Newcastle, I was so proud of our team as they showed their true colours and the potential they have. The team improved with every game and started to scare the opposition. For our last game against St Mary Saints, the team were determined to go out on a high. Illawarra started strong keeping Saints almost scoreless but later slumped to allow Saints to come back with a few runs. Overcoming three days of exhausting baseball Illawarra pulled through to take out the final game with a win against Saints.

Having won two and lost four with a close finish in the fifth, it wasn’t a bad result overall considering most players did pitch with many having little pitching experience, and with 95% of our players being bottom age.  With a bit more training, this team will be tough to beat next time and definitely in years to come.

A big thank you to Donna Behr and Karen Cole for scoring, Rotating players due to the pitching restrictions made it a nightmare for them especially in recording the defensive outs. Also a big thank you to Cash Herbert as bat boy, Hass Baghdadi for warming our pitchers, Scott Hilton for umpiring and assisting where needed, Jeremy Ryan as assistant coach and team EO, and to Adrian Herbert also as assistant coach between gigs. Thanks to all the parents for your support and cheering on the team from the side, and to the players for their commitment, enthusiasm, and fight in every game. 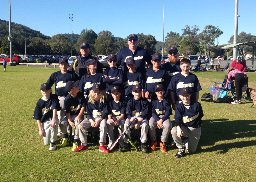