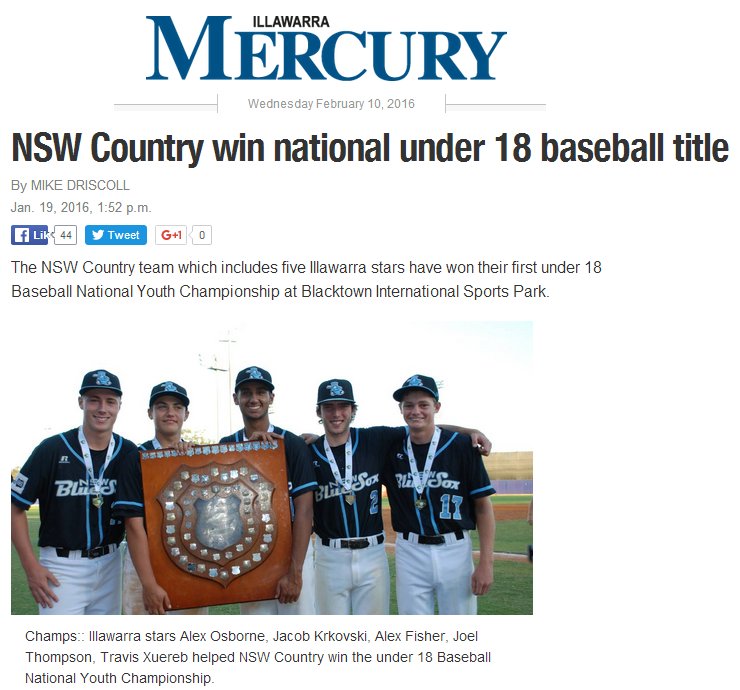 A big thank you to all those who volunteered their time to help prepare the diamonds at Fred Finch Park at the recent Working Bee on Sunday 17th January, 2016. As you can see by the photos below, alot was achieved by the many hands on the day. Great work by everyone!! 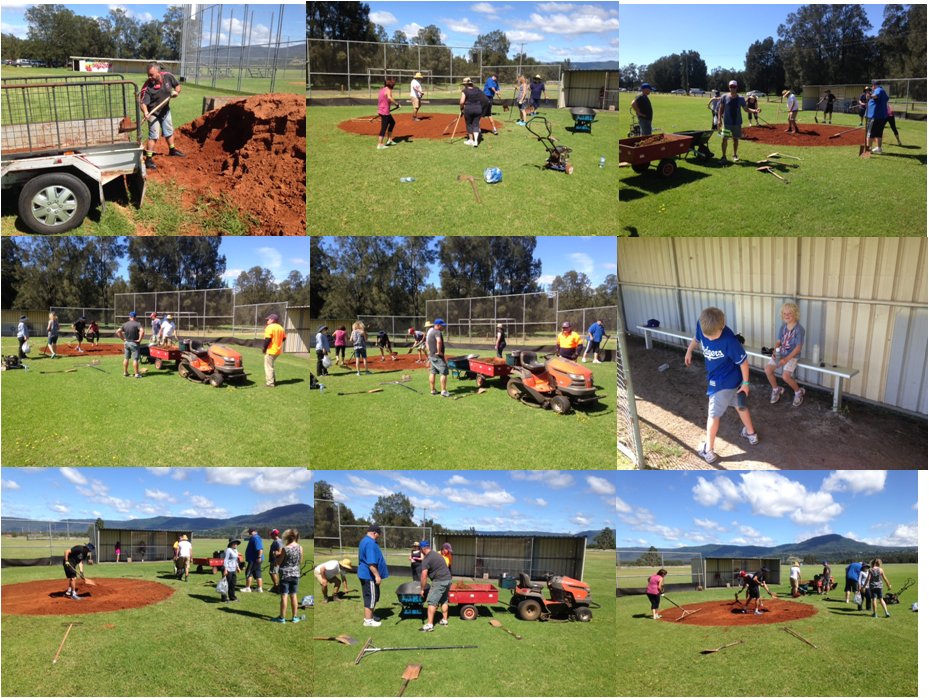 Santa comes to the Illawarra

Santa (who looks alot like Jeremy Ryan from Pirates) visited the Illawarra Junior Baseball players at Fred Finch Park on the last round before Christmas bearing gifts for all. A big thanks to all involved in organising this as it was a huge surprise. 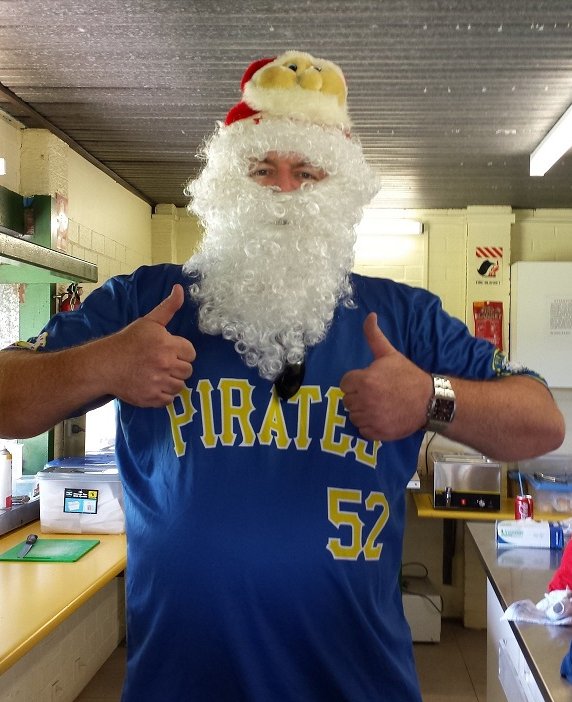 The 189-centimetre pitcher broke his ankle in March but still made the 20-man Australian roster for an event featuring the 18 best baseball nations, and will be part of Australia's pitching rotation.

The 15-year-old is a relative late starter to baseball, taking up the sport just five years ago and even had a four-year break after his initial introduction through Tee-Ball.

Last January, Osborne was part of the NSW Country Blue Sox team that won the national under-16s title at Blacktown.

The 15-Years-and-Under World Cup runs until August 10, with Australia in Group C alongside world No 3-ranked Cuba, No 5-ranked Venezuela, Argentina, Lithuania and Hong Kong.

Australia are ranked No 9.

However, officials believe they are medal contenders and capable of finishing top two in their pool to qualify for the medal round.

LACHLAN Wells’s pitch sounds like a fast-moving grass fire scorching its way from the mound at Belmont’s Les Miller Field towards home plate.

It thwacks into the glove of his twin-brother Alexander who, after registering the pain in his left hand, says casually that Lachlan is only throwing them down at about 75 per cent.

The 17-year-old’s left arm is raw power, capable of producing a 148km/h (92mph) fastball, and has drawn the attention of more than a dozen Major League Baseball scouts.

But yesterday he used his right to make his sporting dream a reality, inking a deal with the Minnesota Twins and becoming the fifth Newcastle-native to sign with a Major League Baseball franchise.

‘‘This is a dream that I’ve had since I was a little kid and it’s finally coming true,’’ Lachlan said.

‘‘This is a dream that I’ve had since I was a little kid and it’s finally coming true.’’ - – LACHLAN WELLS

‘‘It’s life-changing for me and my family because I get to spend six months of the year over in America, playing the sport I love and I know that I’m going to chase my dream.

‘‘We spoke to a number of clubs but in the end the Twins not only gave us a great offer but they also have a history of signing and looking after Australian baseballers. Minnesota also has a good farm system to get into the Major Leagues.’’

Lachlan signed his name alongside Twins international scouting co-ordinator Howie Norsetter in the boardroom of the Belmont Sports Club surrounded by friends and family.

Norsetter said Lachlan first came to his attention as a 15-year-old at the 2012 National Championships.

‘‘He had a good delivery, good arm action, he was athletic and he had a real feel, passion and focus for the game.

STRIKING IT LUCKY: Belmont teenager Lachlan Wells on the mound at Les Miller Field yesterday after signing a deal with the Minnesota Twins. Picture: Dean Osland

‘‘He was one of those players you put on a follow list, a list of players that we think have a chance of getting better, then you go back and see them again and again and again.

‘‘I’ve watched him progress over the last few years and he has the attitude, the athleticism, the arm action, he has those ingredients that we look for in pitchers that we hope we are able to develop.

‘‘We’ve had a lot of success developing those types of pitchers and especially Australian pitchers.’’

Lachlan and Alexander began playing cricket for Belmont as kids before trying their hand at tee-ball when they were 10. They dropped cricket and focused on baseball at 14.

‘‘Because we were left-handed and had a cricketing background, we thought we might as well try our hand at pitching and it worked out all right,’’ Lachlan said.

Alexander, another blossoming baseball talent, pitches off-speed and hopes within the next 12months to sign professionally or take up an offer to study and play at an American college.

Lachlan and Alexander’s mother, Kylie Wells, who is the treasurer of Belmont Baseball Club, said the signing was rewarding for the whole family.

‘‘We are very happy for him, very proud,’’ Mrs Wells said. ‘‘We’ve seen him develop over the last few years, he’s probably got a bit more improvement to go before he hits his peak.’’

He will look to emulate the success of Rowland-Smith, who pitched for the Seattle Mariners from 2007-2010, starting with extended spring training at the Twins’ minor league affiliate Fort Myers Miracle. He is expected to play in the Gulf Coast League, a Florida minor league, as he develops as a player. ‘‘It usually takes five or six years to get to the Major Leagues,’’ Norsetter said.

Brandon Stenhouse is a Yankee: 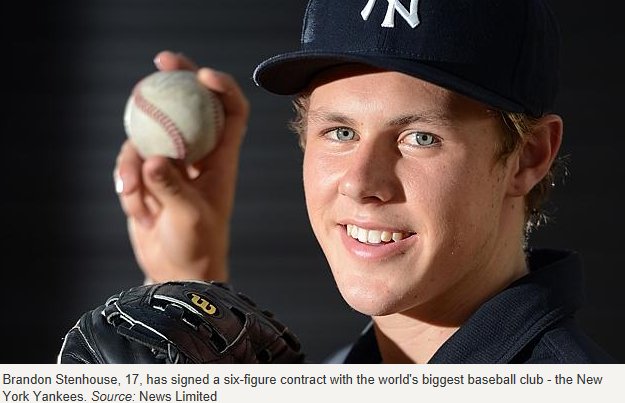 A MELBOURNE teenager has scored a dream move to the New York Yankees after scouts flew from the US to secure his services for the Major-league Baseball club.

Brandon Stenhouse, a 17-year-old right-hander, could go from suburban pitcher to global star after signing the deal this week after impressing representatives from the Bronx Bombers.

Stenhouse, who plays in the Victorian league for Cheltenham Rustlers, was signed after a standout performance at the under-18 national championships in Canberra.

"It's still sinking in and I was a bit nervous signing the contract but it is a dream come true," Stenhouse said.

"I was never sure it was going to happen." Stenhouse started playing tee-ball at four years of age and caught the eye of scouts by consistently clocking pitching at speeds approaching 150km/h.

With at least two other MLB clubs circling, Yankees scouts gave Stenhouse his ticket to the big time this week along with an educational scholarship and a bag of merchandise including the club's famous cap.

"It's a good opportunity but I don't think it will hit him until he gets over there," his father Dave Stenhouse said.

"He got a big bag full of stuff which I think made him the happiest and mum and dad are happy too since we don't have to pay for anything anymore."

Stenhouse will report to Yankees spring training camp in Florida in April for two weeks of orientation before returning to Melbourne to complete his VCE.

He will then move to the US full-time to live his dream.

The Yankees' Australian scout John Wadsworth said the young gun would be given "every opportunity" to become a Major-league star.

"I have been waiting for many years to see if Brandon Stenhouse had the physical and mental makeup to be considered as a possible Yankee," Wadsworth said.

"I am pleased to see just how far this young man has progressed and his future is exciting to us all.''

These are MLB's Top 100 Prospects

The defining stories, players of the decade

Free-agent signings each team can be proud of

Our Illawarra Registrar attended the media conference announcing the exhibition games to be played between LA Dodgers and Arizona Diamondbacks against our very own Australian Team. As  well, it was the official launch of the MLB games to be played in Sydney in 2014. Some photos of  the press conference below. 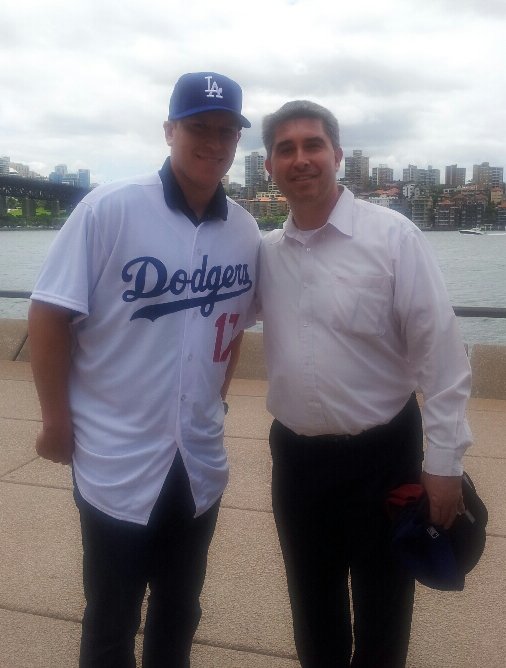