The country teams were placed in their own pool & scheduled to play the other country teams twice over the first two days to determine the Country team that would progress to the Australian LL Championship on the Gold Coast from 24-27th May. The winner of that tournament on the Gold Coast heads off to Taiwan to take on the best teams in Asia-Pacific region & then possibly onto the World Series in USA in August.

We had 3 players that had been involved in the previous years Australian LL tournament, but the rest of the squad was fairly young. Especially when we lost our oldest player 3 weeks out due to a conflict with national athletics championships/camp. So we knew our lack of depth would be tested a little over 4 days.

With 13 teams (10 city & 3 country) from across the State involved, it's certainly an eye opener for any newcomer to the tournament.

Game 1: Against Central Coast, we jumped out to an early 1-0 lead courtesy of a solo homerun to Jarrod White in his first at bat for the tournament. We put on another couple of runs in the 3rd innings to be leading 3-0. Unfortunately Central Coast put on 5 in the bottom of the 3rd to take the lead. We clawed two back in the 4th to even up the scores, then Central Coast got a home run that scored two. The top of the 5th we scored another 2 to get back on level terms & it stayed this way to the end. Johnny Hall-Walsh was great on the mound through the first couple of innings. Brent Yates closing out the bottom to the 6th to get get us out of it with a draw. Although realistically with using up one of our better pitchers this was certainly a game that got away from us. Corey Rower had 3 hits from 4 at bats & Daniel Moss came up with a timely shot through the cones to score the tying run in the 5th.

Game 2: Up against Newcastle who had won their earlier game against Central Coast, we sent Angus Black to the mound & he did a great job through the first 3 innings. This game was in the balance until the 6th innings with Newcastle holding a 3-2 lead, despite them outhitting us & one of their pitchers getting through 4 innings only giving up a single run & striking out 9 in the process. We'd kept ourselves in the game with some good defence, including throwing out some base runners at home. Although on the back of a single error on a routine play, Newcastle we able to put on 3 unearned runs in the top of the 6th to give themselves some breathing room & despite loading up the bases in our turn at bat we were unable to convert losing 2-6.

Game 3: v Newcastle.The Newcastle pitcher kept our bats quiet through the first 3 innings whilst they managed to put on 4 runs. A pitching change by Newcastle brought about a run & we'd loaded the bases with the pitcher struggling a little with his control. Unfortunately our #9 batter popped up to end the innings, with the top of the order all at the ready. This was a potential key moment in the game & we weren't able to deliver. We were unable to score in the next two innings & the game ended with Newcastle up 4-1.

Although in a slight twist it was realised Newcastle as part of their final pitching change had moved a player into the catcher position, whom had pitched a 'major' the day before, which was clearly against the tournament rules. This was brought to the attention of the tournament officials. Although to both Central Coast & our surprise (+ a few other non-Newcastle people) the tournament officials chose to simply fine + suspend the Newcastle coach rather than reverse the game result as was written in the rules. This left Newcastle with an unassailable lead.

Game 4: v Central Coast  Whilst we started the game with some hope that the tournament officials would reconsider their ruling. In the end Central Coast got the bats working in the 2nd innings & hit two home runs that scored them 7 runs, jumping them out to a solid lead. All after a simple error early in the innings that provided them with 5 unearned runs. From there on we were playing catch up. Interestingly we hit 3 home runs ourselves in this game (Black, White & Hall-Walsh), although they were all solo shots. In the end we lost the game 4-13.

So irrespective of the decision relating to the earlier game against Newcastle, we had lost our opportunity to progress to the Gold Coast & finished 3rd in the Country pool.

Game 5: As the other results worked in the City pools we found ourselves up against Macarthur in the first consolation game. Given we'd already played them in a couple of trial games pre-tournament it was a pretty friendly affair. We used this as an opportunity to get a little more game time for our younger players. In the trial games we'd had some close tussles, in fact probably having the better of Macarthur in those games. Although in this game Macarthur got the bats working against our young pitchers & whilst we got a few hits ourselves the game finished after 4 innings with us down 7-23.

Game 6: After seeing things slip away from us in the earlier days there was the odd dejected player in the ranks. Although a chance meeting with the Canberra Cavalry mascot prior to our game against Greater Western generated a smile on the faces & seemed to bring with it a little fortune. With our pitching stocks dwindling a little we sent our two catchers (Faulks & Hawkins) to the mound for this game & they did quite well. The game was tight through the first 2 innings with GW holding a 4-3 lead. In the 3rd finally some aspects we'd been trying earlier in the tournament started to come off. With some renewed confidence we put on 5, then 7 runs over the next two innings to charge to the lead. Whilst in defence we were steady & even pulled off an impressive 4-6-3 double play as part of shutting them out in the remaining innings. We ran out 15-4 winners, which just went to show we only need the odd small item go our way & the results could have been a little different in a couple of earlier games.

The weather at Nowra especially over the first 3 days was fantastic. On a playing level, when the key moments arrived in each games, unfortunately we weren't able to execute to take any sort of momentum - which no doubt had a little to do with the lack of overall experience in the team. On the flip side, those younger players have now gained a significant amount of experience that should benefit them heading into the next years tournament. 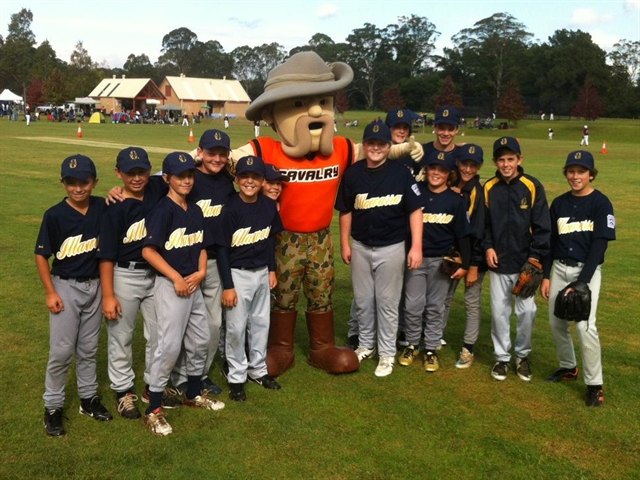